We're happy that all four pups have found new homes.

Pup One, the one-blue-eyed energetic male was the first to leave 3 weeks ago. He joins a household with a Bengal cat. For a week he ran around whining that the cat won't play with him, but now the cat is slowly warming up to him. He's a right bundle of energy and is giving his daddy some good exercise just walking him enough to tire him out.

Pup Two, the pretty female with adorable eyes left about a week plus ago. I was very attached to her, and found her leaving to be a bit painful. But she's happy in her new home, and I'm happy for her. She joins a home with a handsome 9-month old husky, whom they got the pup for as a companion. They reported that pretty puppy is a gem and adjusting well, she's even bullying the older husky! So much so the older husky lets her eat first at mealtimes ha-woo. That's just like Tagar.

Pup Three, the roly-poly male will be going to his new home at the end of the month. He joins a household with a few family dogs (including a Great Dane!) but he will be his new daddy's personal pooch. New daddy intends to bring him around traveling with him, and also let him sleep in his room. Pup Three is going to be one very pampered pooch!

Pup Four, the 'other' female will also be leaving for her new home at the end of the month. She joins a household with two smaller dogs. Her back legs are a splayed - we're giving her medication and she's improving. We hope she will be able to run on good strong legs by the time she leaves for her new home.


Here's some pics of the puppies being puppies! 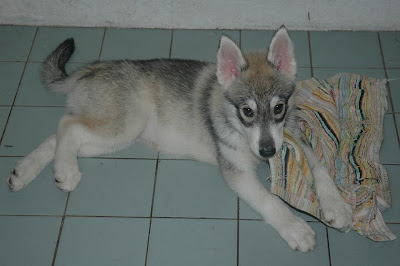 Puppies will chew all rugs in sight ... 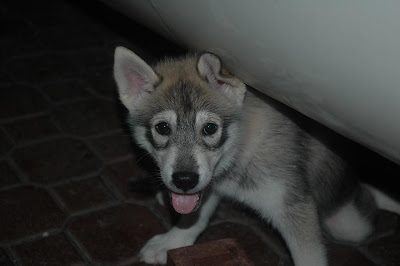 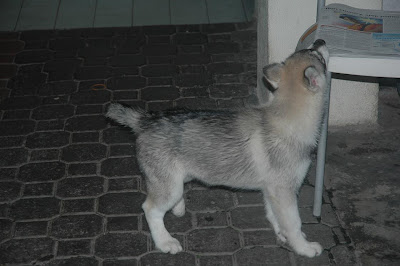 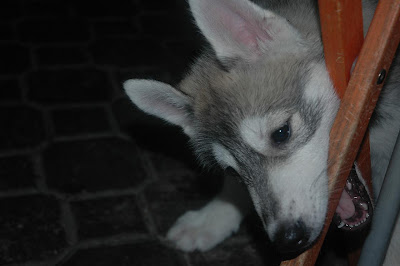 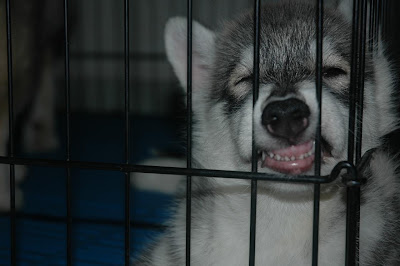 How Togo & Tagar Came to Sleep in the Room

Here's a rather long winded story about how the tyrants ended sleeping in the room with us.

When we got married T&T Daddy worked in a town hole 4 hours away. He came back every weekend. I did not enjoy being apart from him, so he got me a Togo for a companion.

Later on he got jealous of Togo's overwhelming love and devotion, so I had to get him a Tagar. Hehe.

Togo sleeps downstairs, in the grilled in area of the porch. Every night when its time to put him out, Togo flips over for a belly rub and gives us such cute eyes, begging to be let to sleep inside. But we never did let him. We kept wee Tagar separated when we first got her, but after she's big enough to stand up to Togo we put both of them out at night.

One weekend, when Tagar was a little 6-month pup, there was suddenly a LOT of roaches crawling in our house. We do get the occasional roach now and then, but this was an invasion! Huge, big, black scary roaches climbing our walls and scurrying out from under here and there. They look big and tough, like street-smart mamak shop roaches. And they fly. Flying roaches are the worst.

We suspect some nearby house or shop had an extermination, so all these big-ass roaches fled, some unfortunately to us. By this time we've discovered that Togo was quite handy at killing roaches. T&T Daddy and Togo went around killing the big buggers, but there were more the next day. They killed those too, but we knew there will still be more.

I'm not a fan of roaches. Hahaha. That would be an under-statement. I would yelp if I saw one, and scream the house down if one of them (god forbid) crawled on me with their many nasty feet. And these were really big ones!

T&T Daddy had to leave to work at that town hole. There was no way I'm going to be sleeping alone with big-ass roaches crawling everywhere. I took Togo and Tagar up to the room with me. I usually sleep with all lights off, but I kept a night light on just to feel safe.

Oh, and if you're laughing at me for being afraid of tiny harmless creatures like roaches - imagine something you're afraid of. Deathly afraid of. Snake, spiders, biawaks, heights, the tax man. Imagine that gripping fear before you read the next part.

Our housing scheme has the power grids in a weird sequence. My immediate neighbours are not on the same power line, but alternating houses down the street are. I could see my neighbours houses still brightly lit, so the first thing to do is to go down and check the fuse box to see if its a power trip or a power failure.

I was so brave! I'm generally not afraid of the dark anyway. I went out and got the torchlight, but its not been used for a long time and the battery's dead. Great. I went downstairs with my phone giving its feeble light. The two tyrants clambered down after me. I got a chair, climbed up, peered in the fuse box. Nope, no trip, so its a power failure. Nothing to do but to wait it out.

I climbed down the chair, and in doing so the swing of my phone light caught .. a .. big .. roach .. sitting on the shoe rack opposite. I had a horizontal view of the damn thing, its huge body raised on its scary legs, amplified by the poor light.

In my mind, the safest place to be is in the room. There are no roaches there so far. But the way back there is a long walk up the stairs - past who knows how many roaches!

I tried to hurry up to the room. To their credit, the tyrants kept close to me at all times. I was nearing the top of the stairs when I heard, in that awful silence of a house with no power supply, the faint beating of wings.

And then something with many legs landed on my neck.

I ran into the room, screaming like a banshee. Thank goodness the thing with many legs flew off, but now its in the room! My safe haven has a roach in it!

One good thing at least is with all that screaming, I flung the torchlight and it miraculously worked after slamming into the floor. I used the torchlight and looked around till I found the roach that flew on me. It was sitting on a cabinet, its feelers moving about menacingly.

Keeping the light trained on the roach, I called T&T Daddy from my dangerously low on battery phone, sobbing badly. There's nothing he can do though, its too far for him to drive back and rescue me from fear. I called a handful of people I can trust to come save me without laughing, but were either away or not answering.

So I sat there, with the tyrants comfortingly circling me. Togo even jumped on the bed and nuzzled me. T&T Daddy called TNB and they said power should be restored in an hour.

I know the logical thing to do would be to go sit in the car, where at least I'll be safe from roaches and there is light. But to get to the car! I have to walk down the stairs! I have to get the house and car keys! I have to open the grill, which is beside that shoerack with guardian roach!

All this time I had the torchlight trained on the rogue roach in the room, who had remained unmoving. Slowly the circle of light dimmed and grew smaller. The damn battery was failing! Even I could see the humor - its like a really crappy horror movie. And after the calls I made, my phone is out. Great.

I decided to make a run for it. With the tyrants at my heel, we dashed down, dashed for the key, dashed out of the grill and scrambled into the car, all three of us. Togo was excited, he loves car rides. Tagar was perplexed and sleepy, she looked about to drop of to lala-land.

Safe in the car! I switched the headlights on for some comfort, and illuminated on the wall in front of me is two more roaches, happily having a walkabout. Lemah hati.

We waited awhile till the lights took my fear away, then we drove off to pass time until the power came back on. I stopped at 7-Eleven to get a new torchlight with batteries, then drove to my sis-in-law's house (she doesn't live there, so she can't rescue me. luckily I have her spare keys.) to charge my phone to be able to give an update to a worried T&T Daddy.

When we came back we waited awhile in the car and then the power came back on. I waited a bit for the roaches to scurry back into whatever hole they were hiding in, then went in to finally sleep.

I would not have survived that dreadful night without the furry tyrants. Everytime I think of that night I give Togo and Tagar an extra big hug.

After that, Togo and Tagar slept with me every night. When T&T Daddy is home, he used to put them out, but after a while he fell victim to their adorable faces and let them sleep with us all the time.

I've never managed to take good photos of Tagar. She photographs terribly, but somehow when Daddy's wielding the camera she decides to pose. (Although she still averages about a dozen failed shots for each good one. But still.) 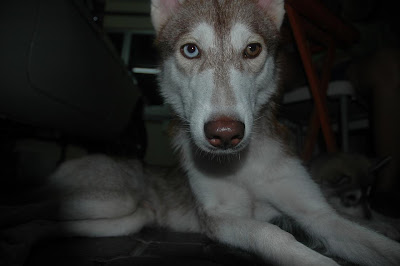 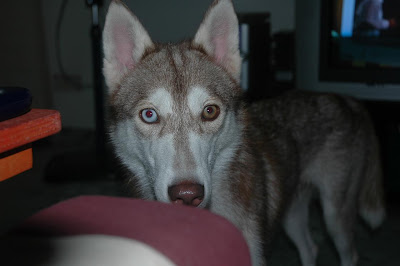 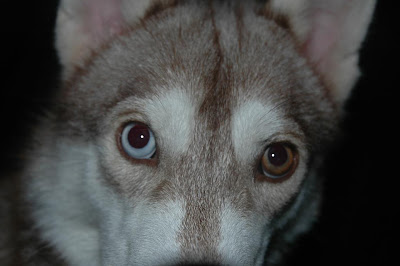 The cuties have grown from the little rat-like blobs into pretty little miniature huskies in two short months. One cutie has left the brood to his new home, and we hope the rest will get settled to new homes soon. 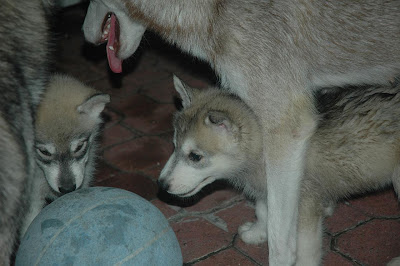 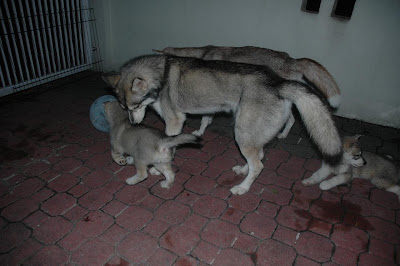 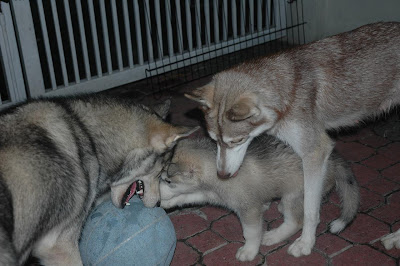