Was it just last week I mentioned that the tyrants were not doing anything interesting enough to blog? Tagar took up the challenge and did something so gut-wrenchingly (pun intended!) 'interesting' last night. 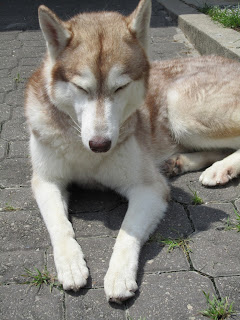 Tagar is the calmest and most even-tempered of three tyrants. She is also the deadliest, having killed an assortment of rats, cats, lizards, birds, squirrels and about a gazillion cockroaches. I don't prefer to blog about the poor dead animals that crossed Tagar's path, but yesterday she outdid herself. It's almost a work of (very macabre!) art.

The local council is extremely diligent about issuing summons / clamping / towing away badly parked cars, but are closing two blind eyes over the rat infestation problem. We live close to a commercial area with many restaurants, and its fairly overrun with rats. We see huge rats running about the streets at night. We get the occasional dumb rat venturing into our garden, and we get the occasional cleaning of dumb rat's corpse after it met Tagar.

Last night, Tyrants' Daddy heard the familiar squeee squeee of a caught dying rat. He rushed out and saw .. 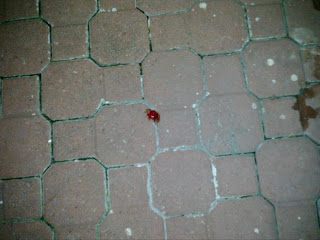 blood on the driveway... 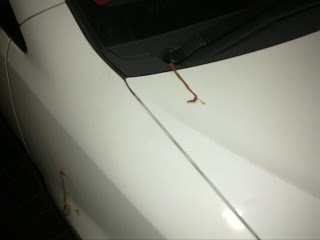 intestines on the windscreen... (what!!!) 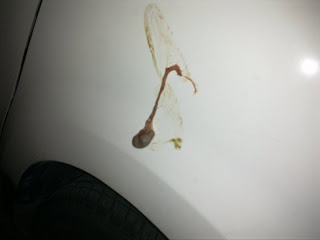 some innards thing sticking on the car... (WHAT!!!) 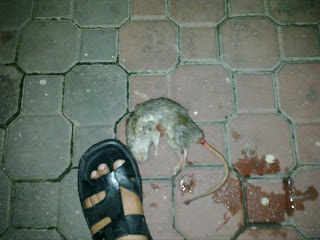 and the mangled dead rat.
That's a fairly large rat, as Tyrants' Daddy has a fairly large foot. There was also strings of intestine on garbage chute door, which was a good few meters away. And Tagar was covered with quite a bit of blood.
I still cannot imagine how violently the killing must have been, to be spraying innards all over the place. Tyrants' Daddy had the unpleasant job cleaning up the crime scene and washing up the very bloody Tagar. 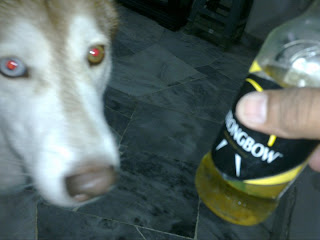 Later, Daddy and (a clean) Tagar shared a cider for their efforts.
at 7:50 PM 6 comments:

Oh ho. The blog has been silent for some time.
Don't blame me. I'd blog, if the tyrants did anything remotely more interesting than napping all the time.
Humph. 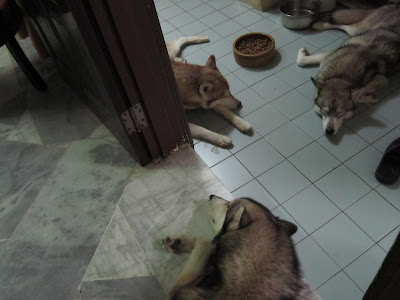 Go away mommy. The camera is disturbing our nap.
at 1:21 AM 5 comments: