Tagar and Gamby are masters of the art of being lazy.
Here's how they do having breakfast lazily. 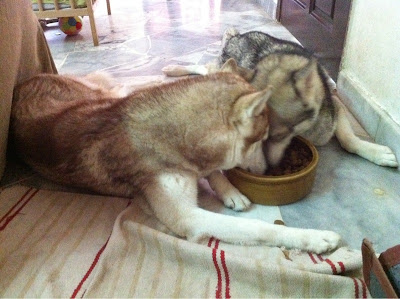 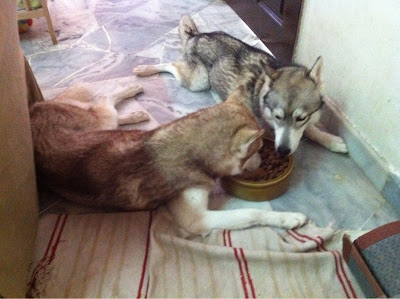 Having to share a home with a messy toddler?
No problem. Togo is adaptable. Nothing cramps his sleeping style. 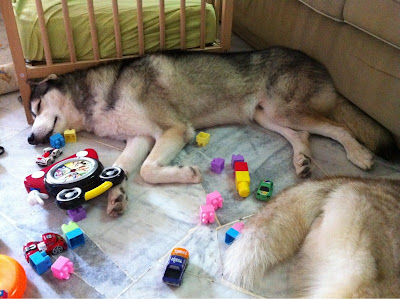 - Posted using BlogPress from my iPhone
at 1:38 AM 2 comments:

Snuggling up to you

There are countless times I wished I had a camera / phone with me to catch that moment.

I'm in luck today. I had my phone with me when the Tagar came snuggling up to me, resting her upper body on the couch. Then the hooman tyrant in turn snuggled up to her and feel asleep - just like that! 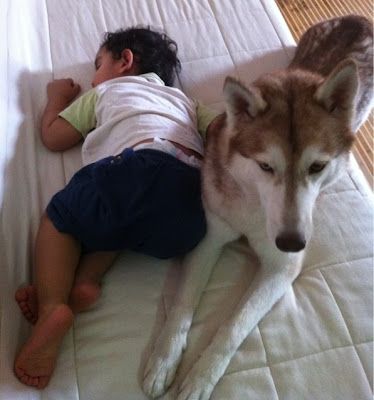 A short story in photos.
Title : Mommy, the hooman tyrant is not sharing. 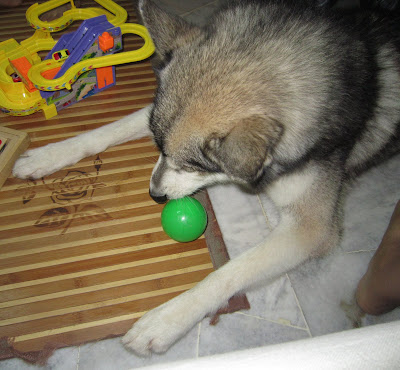 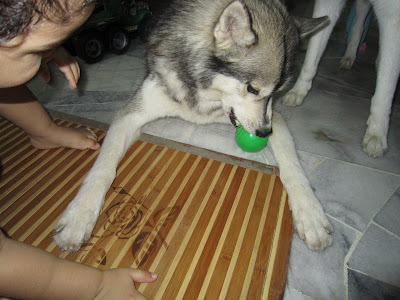 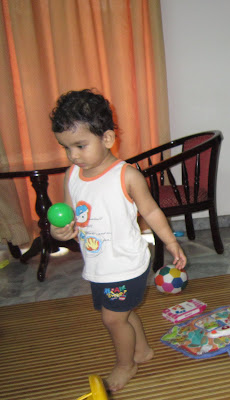 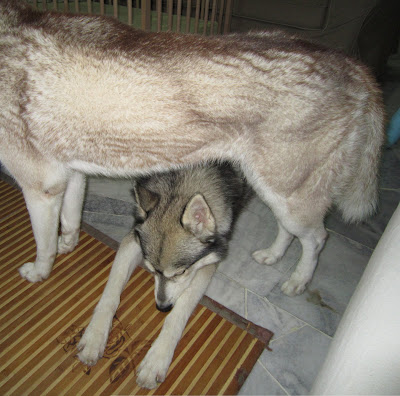 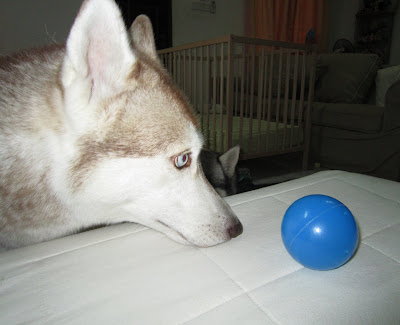 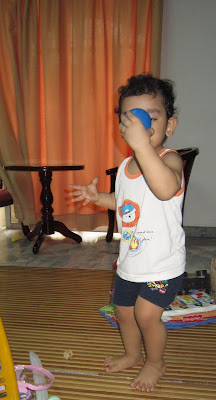 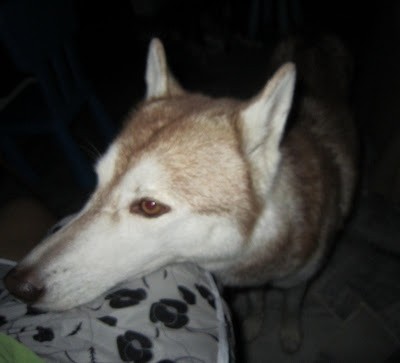 Last Friday we were out late, and got home past midnight. We came back to find the tyrants area smeared with streaks of bright red blood.

At first we just groaned at the disgusting mess and started hunting around for whatever poor animal that Tagar must have killed. We suspected she must have butchered another foolish rat. But we couldn't find a dead anything, not even leftover bit parts.

Then we noticed that only Gamby was covered in blood. And a lot of it, too. Her mouth and chin were soaked in red. Her front paws were soaked through till her knee - she looked like had put on red socks. I did not take photos of the bloody mayhem, but she looked something like this (pardon my excellent photo editing skills). 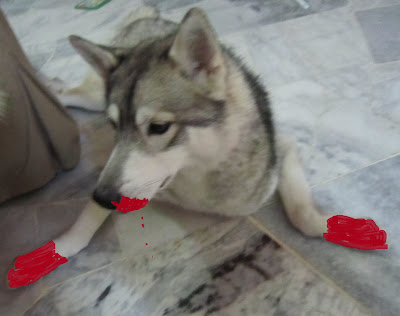 I was convinced Gamby must have ate the killed creature. With all that blood on her Gamby honestly looked like she just munched on a walrus.

Daddy was instead convinced they must have been fighting and Gamby got injured. They do occasionally fight but we can tell when they do because they will be pulling horrendous faces at each other and keeping their distance. But the tyrants were showing no signs of hostility to each other.

Daddy cleaned up the bloody floor while I coaxed Gamby to the tap and washed the blood off her. I didn't find any obvious cut on her. She got cleaned and wandered off. A minute later she was all bloody again!

I cleaned her off again and kept and eye on her. Gamby wandered for a bit the pawed her nose, wiping a streak of fresh red on her leg. She wandered on a bit more then lifted her head and sneezed - splattering the wall with globs of red.

Gamby was having a nosebleed.

No wonder she was soaked in blood. She was bleeding quite a lot. The blood pooled in her nose and drip down in scary splash whenever she put her head down.

None of the tyrants had a nosebleed before and we did not know what to do. By then it was pass 1am. Google gave us some quick answers and also the numbers of the few 24 hour vets available.

In the event of a dog nosebleed you can do these to help the blood clot and stop the bleed
1) Calm the dog down. And you too. Calm down!
2) Keep the head tilted slightly up to beat gravity pulling down more blood.
3) Apply an ice pack on the bridge of the nose.

You might want to Google 'dog nose bridge' too, if you're like me. I spent some time freezing Gamby's nostrils before realizing that it can't be right. Poor girl!

Gamby's nosebleed didn't stop immediately. We called the nearby 24-hr vet who advised us to try the ice pack and wait for half and hour. We had a hard time trying to keep her calm as she wanted to get into the house and we can't allow her as she was still dripping a lot of blood.

She wandered around sneezing blood on the walls, floor and the white car. I tried to get her to sit down and rest but she kept running off, aggravating her nosebleed and spewing more blood. She bleed so much! There were pools of in on the floor, speckles of it on the walls, streaks of it on the car and big giant drops everywhere she walked. Good thing no one is passing by our house at that late hour - I must look like a horror flick extra, standing in a bloody porch with a bloody dog. The sharp metallic smell of blood was so strong. (Good thing I'm neither squeamish with blood nor a vampire.)

Finally Tagar joined Gamby outside and that visibly calmed Gamby down. She stopped moving around and sat down to rest. Her nosebleed started slowing down and the blood got thicker, much to our relief. Tagar made a lot of fuss wanting to come into the house, but since having her outside kept Gamby calm we left them both outside.

It took awhile but Gamby's nosebleed did stop eventually. By dawn she was ok. She kept snorting though, her nose must have been uncomfortable. 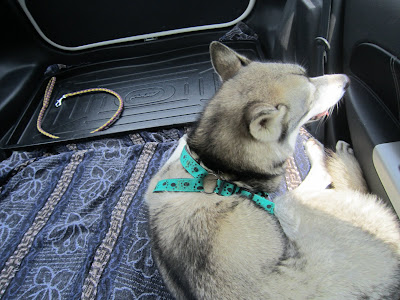 On the way to the vet
We took her to the vet for a checkup. The vet examined her nose and did a blood test. The blood test came out ok, there were no sign of tick fever that could be the cause of a nosebleed. He said Gamby most probably hit something hard and got the nosebleed. We will have to watch if it happens again, though. Frequent nosebleeds are an indication of something more serious.

Gamby's fine now. She's back running about at top speed.
Take care, Gamby. Don't run into the furniture. Or the walls. 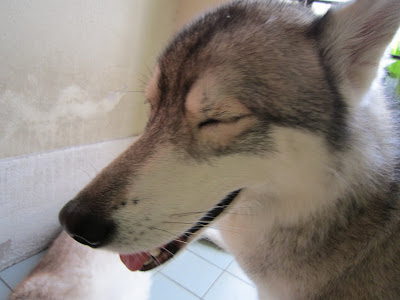