I am not a fan of cockroaches. Having one cross my path would generally make me shriek and screech until someone kills the ugly cockroach and disposes it. Although to tell the truth, I would only shriek if someone is around to kill the roach. No point screeching otherwise, the damned roach isn't keel over and die. I would then just quietly edge around the awful thing and not enter that room for the next 8 hours.

But now I have the ultimate weapon against them roaches - a Tagar! 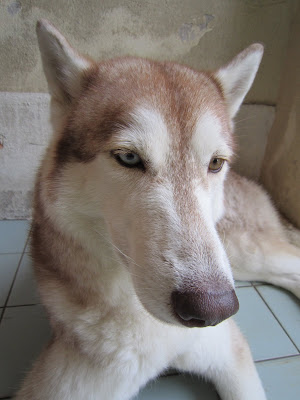 The Weapon
Tagar always gets the roach. Her hit rate must be close to a 100%, hardly any she hunts escapes. But this wonderful roach weapon is very hard to use.

Like today, there was a big roach in the downstairs bathroom. I called and Tagar came running - after about two minutes of repeated calls. She was napping and took a while to decide to get up and answer me - I could see her open eyes rolling about mulling whether to abandon her nap or abandon her mommy. 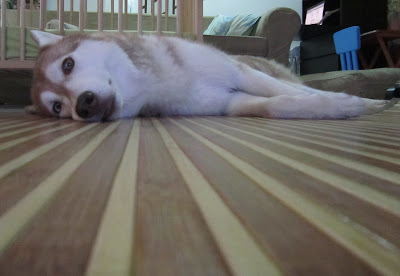 Should I get up? It's probably just a silly roach.
Then she came running - and stopped at the door, eyeballing me suspiciously. The downstairs bathroom is where the tyrants usually get their bath, and Tagar thought she was being conned into having one. I kept calling and maybe some of my distress was showing - she slowly inched her way into the bathroom. I pointed at the roach, but Tagar refused to take her suspicious eyes off me, so I had to manually turn her head and point her nose at the roach.

Aha! Tagar tail went up and her whole body tensed. She went into full alert hunting mode, all senses focused on the roach. It started scurrying around, trying to hide behind then under the door. Tagar snorted around a bit and then backed the roach into a corner, then with a quick dart caught the awful thing and ran out with it. 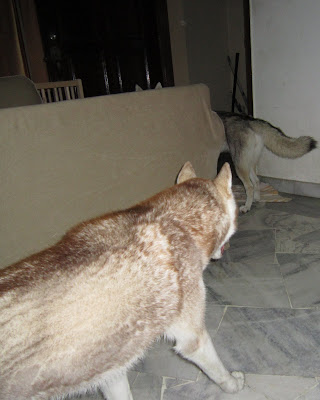 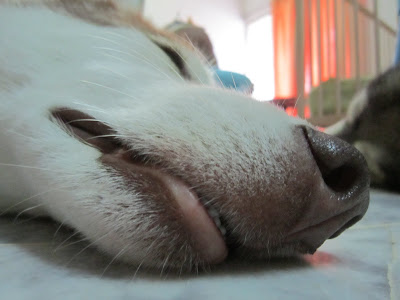 Ok, I saved you. Now let me get back to sleep.
All three of them can catch roaches, but Togo is too lazy and Gamby is too klutzy.
Here's another roach story from yesteryear.
at 10:02 AM

So that's how Tagar earns her keep! What a smart dog. I bet you feel safer with her around. :)

What a pawesome talent to have!

Thanks for stopping by our blog! Sorry it took us so long, the move has delayed us greatly! We are now following you and can't wait to read more adventures (but hopefully minus the roaches)

what a good doggy Tager is! that last photo is precious and had you not just told us that Tager had a roach in those cute little fuzzy lips we would give Tager puppy smooches...Well wait till you brush Tager's teefies first!

Discover blogs,videos and pics you otherwise wouldn't have at http://kendrabing.com . Or submit your blog posts to be part of the whole big collection.

Good job, Tagar! It's an icky job, but somebody(doggie) has to step up :)