When we have afraid-of-dogs guests in the house, we put the tyrants out to chill in our little walled-up backyard.

Last week we had some such guests, so we put them out for a bit. The back yard borders the back alley that is teeming with stray cats, so as a habit we give the back yard a quick check for any dumb cats before letting the tyrants out. No visible dumb cats, so we let them out.

The tyrants did the usual running about for five minutes. Then suddenly all three of them tensed, tails up, nose down. They started sniffing and growling at the utility shelf. There, wedged in between the stack of bric bracs in a hidden pocket was a dumb cat.

The tyrants, once excited with a live plaything will not respond to anything. Calling, commanding or enticing them with food won't compare with the prospect of 'playing' with the cat. We usually have to bodily haul them, one by one (while not letting the one already hauled away to run back in when the hauling out the other) to give the dumb cat a chance to escape. Luckily Daddy was around, he's much stronger at hauling them out.

But before he could manage to get even one tyrant out of the way, the dumb cat  left the safety of its shelf pocket and tried to dart out to freedom. Unfortunately the path to freedom was directly past all three tyrants, and even more unfortunate for the cat is that Tagar has excellent hunting skills.

Tagar snapped up the dumb cat the instant it darted out. The cat put up a surprisingly ferocious fight. It clung with all four paws on Tagar muzzle, screaming like a banshee, swiping at her face repeatedly.

Daddy got hold of whatever was close by and had to hit the cat a few times to make it let go. Then he had to struggle with the tyrants to let the dumb cat escape. He actually had to hit the cat so hard that the stick broke in three places before the cat let go.

If you're thinking 'oh poor cat, how cruel to hit it so' please note that the cat escaped alive. The alternative is to stand back and do nothing and watch the dumb cat get torn apart by three big dogs. The cat may put up a hell of a fight but it will not win against a Tagar five times its size, much less three tyrants combined. The result would have been a very bloody messy death.

While the tyrants were barking their heads off at the escaped dumb cat, we discovered why the cat put up such an unusually aggressive attack. There lying on the floor was a small kitten, so young its eyes were not yet opened. That's why the cat darted out - she was trying to carry her kitten to safety.

We may dislike cats intensely, but one has to be heartless not to save a kitten. We grabbed it before the tyrants noticed, and Daddy rechecked the shelf pocket. There was another kitten there! By then the tyrants had caught whiff of the smell and were trying to reach the cat from the other side, putting their paw in through. Daddy fought them off and rescued the second kitten. 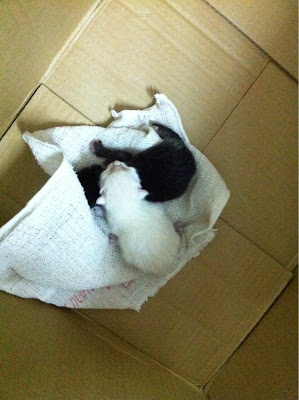 The dumb mother cat is a long time resident stray of the back alley. She has also given birth to a few litters before. If I could speak cat language I would like to ask her - Why? WHY would you be so dumb as to build a nest for your newborns in a three dog territory? Where other cats have died before? (I'm sure cats gossip). Aren't cats supposed to be smart? Where is your common sense?!

Tagar got a deep slash on her muzzle and a few other small cuts on her face and nose. She also got a cut on her ear so deep it showed on the other side. Her cuts are healing well, she look like a pirate dog now. 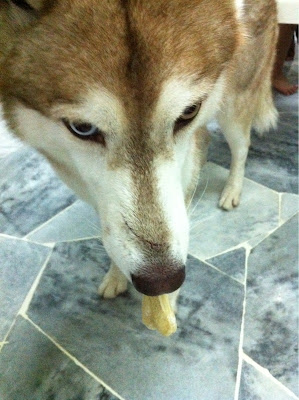 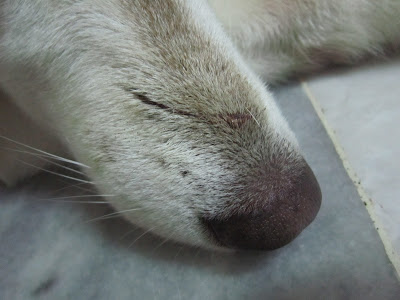 Photos taken after we cleaned off the blood.
at 9:04 PM

Email ThisBlogThis!Share to TwitterShare to FacebookShare to Pinterest
Labels: cat and dog, kittens

Well I am very glad that everyone escaped alive. We also have strays that inhabit our backyard. Luckily we have never caught one.